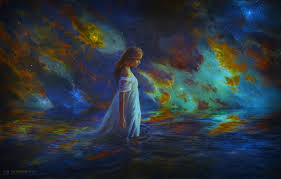 Since I started this blog in December I have added many poems. Two poems stand out for me “Symbol of Our Ancestor’s Astronomy” and “Mysteries Among the Stars.” Both of which I wrote almost ten years ago and I believe that their theme is ironic. Back when I wrote them astronomy was advanced, but not as much as today. But the message that I gave in those poems shows that a writer can’t predict the future, but based on the world around them, they can have a sense of what the future might be.

In “Symbol of Our Ancestor’s Astronomy”, the last few lines of the second stanza say” All our ancestors had were the stars/Some inventions and thousands of wars/We have more inventions and more chaos/We build on revenge and not trust.” Now mind you those lines were written almost ten years ago. Somehow those inventors of the technology we know today, knew it would take us far in communication, which is great. But it has also made some in our society believe, that they are better than technology. So where does that leave our inventions? It has to be in the hands of good people. That way we can make this planet a safe place for all of us to live on.

In “Mysteries Among the Stars” the third stanza says “ There are so many mysteries among the stars/Are they all spheres or are they all so far?/I have a feeling they are one big globe/ Giving an impression of future that we don’t know.” The idea that the earth is just a small part of such a vast universe. That somehow it could be destroyed, if human beings don’t take care of their planet. No one can predict the exact facts of what the cosmos can bring to earth, in a good or bad way. There are many theories, but when that moment comes will us, as living species, need to be ready to take on such a challenge. The stars are a mystery, but yet on this planet we have some of the brightest minds, who try to find the pieces to a puzzle that today can take less than a decade to solve.

I am not a scientist. In fact I never took an astronomy class. But as an avid reader of the stars and a fellow earthling, with the gift of making words into a story or poem, I do care about the universe. These two poems have carried their legacy so far in my portfolio. I would like those who read my blog, understand and maybe even agree with me. That irony that has lied in the stars in the past, followed through the present and finally here in its future, has a meaning for our society. Because the mystery and symbolism in these poems may be from the stars, but it is also from what my eyes can see on this rare planet we call home.