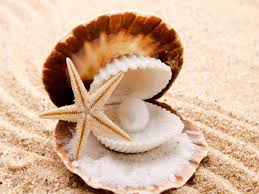 As I sat at the edge of my driveway, I could feel the heat press against my skin.  But a breeze softened my face, leaving a trace of fresh salty air.  I knew my friends and I needed to cool off.  Just as I was about to call, to remind them, they both surprisingly stepped outside on their driveways.  The odd thing about our houses, in which I never realized until now, is that our location formed a perfect triangle.

“Good day for the beach,” Xavier thanked me for the invite.  He then handed me a cold can of orange soda, whose fizzle matched a memory of a science experiment I had done in class the previous year on volcanic eruption found throughout the world, dormant and active.

“Yeah, it sure is,” I agreed standing up on my worn out Flip-flops, but then mentioned,” My sister should be there with her friends.  Maybe there’s a spot nearby to lay a blanket.”

Ian was the last to hurry over, carrying a red blanket, that to me looked like a magic carpet.  He smiled,” I’m glad school is over.  At least we can enjoy the Sound while we can.”

“Maybe we’ll find something there,” I guessed mildly, yet dumb founded by both my friends’ gullibility.

“What do you think we will find?” Xavier asked.

“Yeah, Xavier’s right,” Ian agreed,” Something crazy like we always do.”

“I’m just kidding,” I laughed as I awkwardly walked backwards up my driveway,” Now let me get my stuff.  I need to leave a note for my Mom.  She’s at the grocery store and should be back shortly.”

“Are you sure she’s at the grocery store?” Ian asked.

I didn’t comment on that one.  I never knew where my mother could be.  Sometimes she just appeared out of nowhere.  Instead I entered my house, looking forward to an afternoon at the beach with my friends.

Though the tourist season was gradually winding down, the crowd at the beach still managed to make it a challenge to find a spot.   It was a ten-minute walk to the Sound’s shore and when we arrived, the sun was larger than ever, but it didn’t hide the crescent moon that lied not that far away.  I couldn’t wait to go for a swim, gather seashells or dodge the tides.

“Noah, there’s a spot over here,” my sister Lacey lifted her purple sunglasses.  She was with a few of her friends, who all sat on their own beach chair.  They were all on their kindles, each with a can of cold ice tea, as well as fruit-flavored ice pops.

“Thanks sis.  Are you celebrating?” I asked.  My sister had a recital last week for the Fourth.  Her friends played their woodwind instruments, as my sister had finally mastered the keys on the piano.  They came in first place and won a trip to the Metropolitan Museum in the city.

“Yeah. The beach is a fun way to party,” Lacey agreed as she took another lick of her Popsicle.

“You must’ve had luck on your side,” Ian complimented Lacey, whose fair skin was now pink, but covered with plenty of sunscreen.

My sister didn’t say anything.  She almost dropped her treat in the sand, as she used her left hand to tighten the zipper on her tote.  Inside I saw something sparkle, then it faded as quickly as I came to absorb it.  I knew Lacey didn’t have a lot of jewelry.  If she did I’d knew better that she would take it to the beach so I asked,” What’s that shiny object?”

“A heirloom from Mom’s mom.   Our Grandmother,” Lacey explained as she pushed her sack behind her,” Mom gave it to me since I’m the oldest.  I used it during my recital.  Mom said it would protect me.”

“Bad guys,” Ian answered before my sister could say anything.

“No, it gives positive energy,” Lacey explained, but kept her eye on her bag.  She zipped it tight and turned the lock she had on it.  She then watched her friends log out of their kindles. She then decided,” It’s getting hot.  My friends and I are going for a swim.  Remember Noah don’t touch my stuff.”

My friends and I looked at each other.  Xavier had a smirk on his face.  Lacey and her friends got up and hopped their way down to the shore avoiding the hot sand that reddened their bare feet.

“She seems more worried about that than her phone,” Ian admitted as he lay the blanket across the sand and asked,” What is in there?”

Xavier threw his backpack on the blanket.  He then opened a pocket and pulled out a shiny silver pin.  He explained,” This works on my locker at school. If I ever lose the key.”

“Let’s hope she doesn’t see us try,” I warned, but my sister was too busy laughing and splashing like a child in the water.

“Is this a good idea?” Ian asked as he sat on the blanket anticipating trouble.

“Watch this,” Xavier’s determination held a bit of sarcasm, as he pulled my sister’s bag towards him.  He then placed the pin in the lock.  He turned it until he heard a click.  He then released the lock and unzipped the bag.

I looked inside. This heirloom was shaped like an oyster shell, but inside there was no pearl.  There was a slight melody coming from it.  But it wasn’t anything familiar.  I knew my sister wrote songs and that she tried to sing.  But this sound moved up and down like waves, but not the waves of the ocean, but the waves of the universe.

The world seemed still at that moment, but I knew one day that would all change.

Xavier held this seashell or as my sister had called it the “family heirloom” in his hands.  I was afraid to pick it up, not wanting to hear the scolding of my sister or even my parents if I had somehow dropped in the sand or it ended up in the ocean. But Xavier considered,” Noah, this belongs to your family.  I believe that you should hold it.”

When my friend handed me the seashell, a pale gray outside, with a bright yellow inside, it surprised me.  The texture was somewhat delicate and smooth, not hard like a shell, which made me wonder if it really was a sea creature’s habitat from the ocean.  Maybe my sister was fooling me.

“Let’s run.  See if it has powers,” Xavier suggested as he took his phone out of his backpack.  He then placed in one of the pockets of his swimsuit.

“Yeah, maybe it’ll take us to Oz,” Ian laughed, but believed that Xavier was joking, when I knew he wasn’t.

“Let’s go before my sister sees us,” I agreed, as both Ian and I picked up our phones.

Then my friends and I ran across the hot sand, avoiding the shoreline, until my sister and her friends were only seen in the very distance.  Xavier suggested that I should lead them and that Ian and he should follow behind me.  The more I thought about what Xavier suggested, the more I realized we were racing like a flock of birds.

“Make it do something,” Xavier shouted as the beach started to become less and less crowded.  An empty lifeguard’s post was the only object on the sand that was covered with broken seashells and black rocks that scattered in different directions, just like the trillions of stars that dotted the night sky.

“O.K.,” I agreed with Xavier.  I then stopped, letting my feet in the muddy water.  The tide then tickled my toes, as I closed my eyes.  I then moved in a circle, but nothing happened.

“If it does something I’ll film it,” Ian promised.

“That’s if it records,” Xavier laughed.

“Wait a minute.  I feel something. A current of some sort,” I yelled as I rotated away from the shore and aimed the seashell towards the land behind me.  The seashell’s obscured surface was now glowing like the sun would be a noon day.  Carefully, I opened the sea shell and I looked inside.  There was now a pearl large as the seashell itself.  There was a movie playing on this ocean mined jewel.  It was a rock being powered by lightning.  I closed the seashell in fright.  It stopped beaming its’ radiant light.  I looked up, staring at the beach house in front of me.

“My phone is dead,” Ian complained as he tried his best to reboot his phone.

“My father’s work is behind that house,” I spoke rapidly, trying not to lose my breath, as I concluded,” This is not just an heirloom.”

“Then what is it?” Xavier asked.

“I don’t know, but- “I began to say as the seashell lit up again. This time golden as ever. Then my friends and I were gravitationally bonded by this unknown treasure from the sea.   We ran as if the muscles and bones in our joints would never ache again from the power that we now had encountered.  Now we were off on a beaten path, to somewhere, in which we didn’t know where we were going.  Then we came upon a place that was more mysterious than ever.

I didn’t know where we were.

Only my family’s heirloom knew the answers.

Up ahead there was a boat dock, but it wasn’t as old as many found on the Sound. The docks were not made of wood.  They appeared to be a dark gray, just like this seashell had been before it lit up in to something fascinating. I stopped, realizing there was nowhere to hide.

“Where are we?” Ian asked,” This is some positive energy.”

“I don’t- “I started to say, but was interrupted by a yacht pulling in. Once it had docked, wobbling a bit from the waves it created, a man climbed out of the boat, along with another that didn’t look like a man, but a robot and then a woman.  When their faces turned, I recognized them.  I shouted to my friends,” Those are my parents.  We must run.”

My friends and I tried to run, but the gravitational pull of this heirloom, wouldn’t let us move.  My parents and this creature started to walk up the dock, their footsteps echoing loudly on the metal-like dock.  They came face to face to me, but then disappeared.  The boat and dock were there no longer.  The heirloom turned into an ordinary oyster shell.

“I think we better give this back to your sister,” Ian started to walk ahead and then smiled,” My phone is working again.”

“I can’t think of anything that can over power Wi-Fi,” I tried not to laugh, but then said,” Solar storms can.  But it had to be a great electric power.”

“Noah, look at this,” Xavier pointed to the sand so Ian and I walked over.

I read the stick drawn message on the shoreline.  Its’ caption read, “Noah’s Story of the Heirloom.”

My friends and I looked at each other in great fear.  Then with the next tide the message disappeared.  We then ran back to our intended spot to get some sun, close to the safety of the crowd.

I thought to myself, as I guarded the heirloom with my life.

What other part of the puzzle do I need?